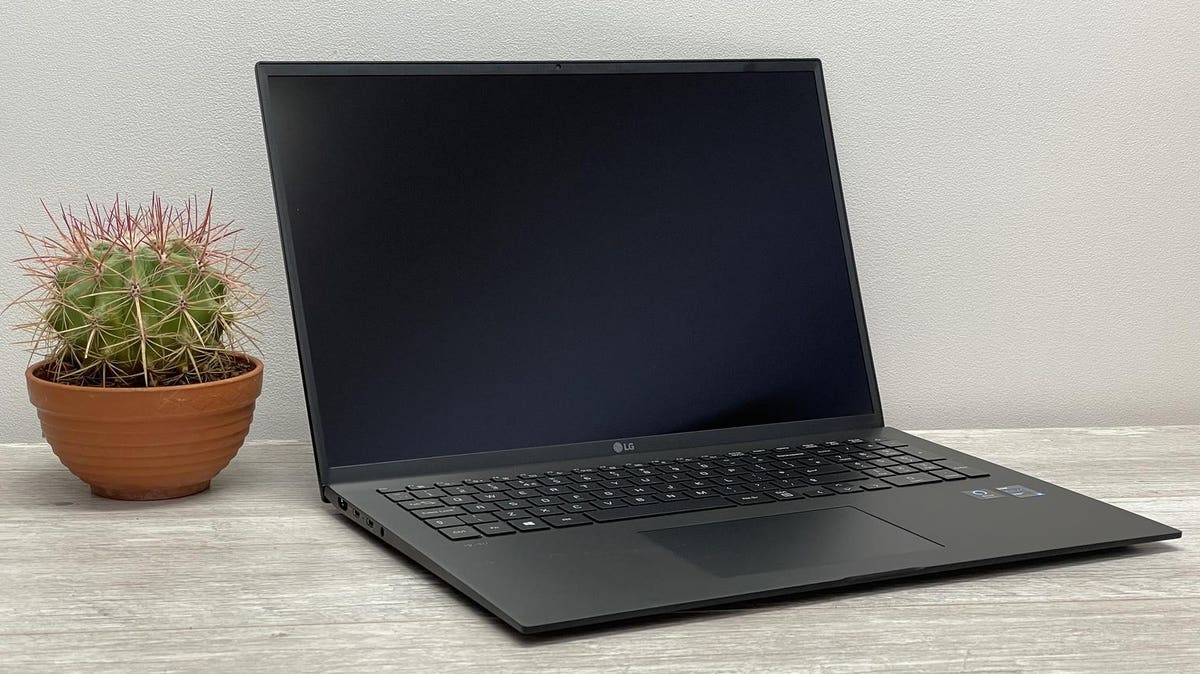 The Gram has been one of my favourite non-gaming laptops and it’s no surprise that it has sold extremely well over the last year as more of us work from home. The combination of extra large screens, supreme light weight, excellent battery life and good performance all result in an attractive package for anyone on the move or needing something that’s focussed towards word processing and content creation. I was, therefore, very interested to see how the third generation of the Gram stacks up. 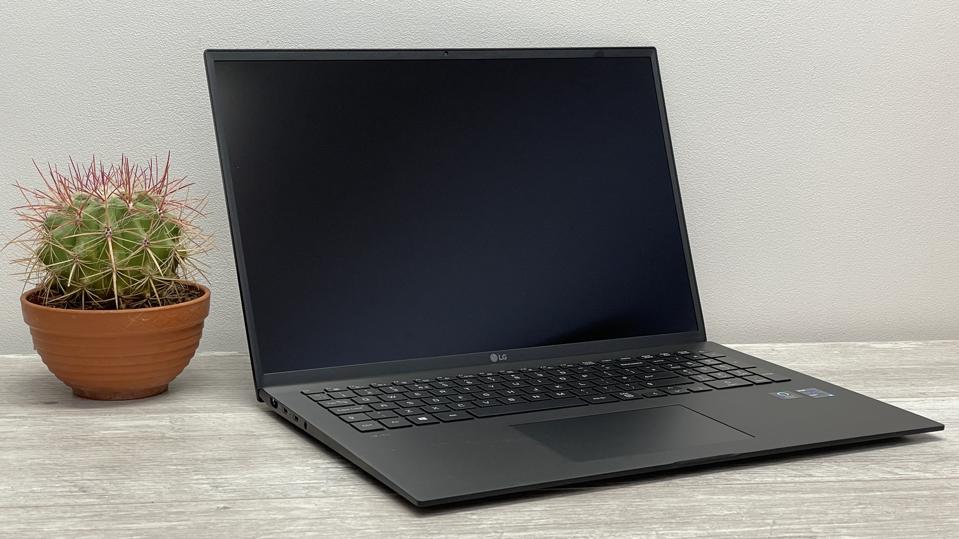 As usual, I’m checking out the 17 inch version of the Gram (see my 2020 and 2019 reviews of the previous models), which despite having a 17 inch screen, will fit easily into a rucksack that can hold a typical 15 inch model. The extra screen real-estate doesn’t just benefit from additional area, but is 1,600 pixels high rather than the more typical 1,440 or 1080. This means it has a 16:10 aspect ratio rather than 16:9, giving you more height to play with. This results in side by side window viewing becoming that much more effective, although when you watch 16:9 widescreen movies there will inevitably be a couple of black bands top and bottom unless you stretch to fit. The benefits far outweigh the positives, although this unusual size likely adds to the cost. 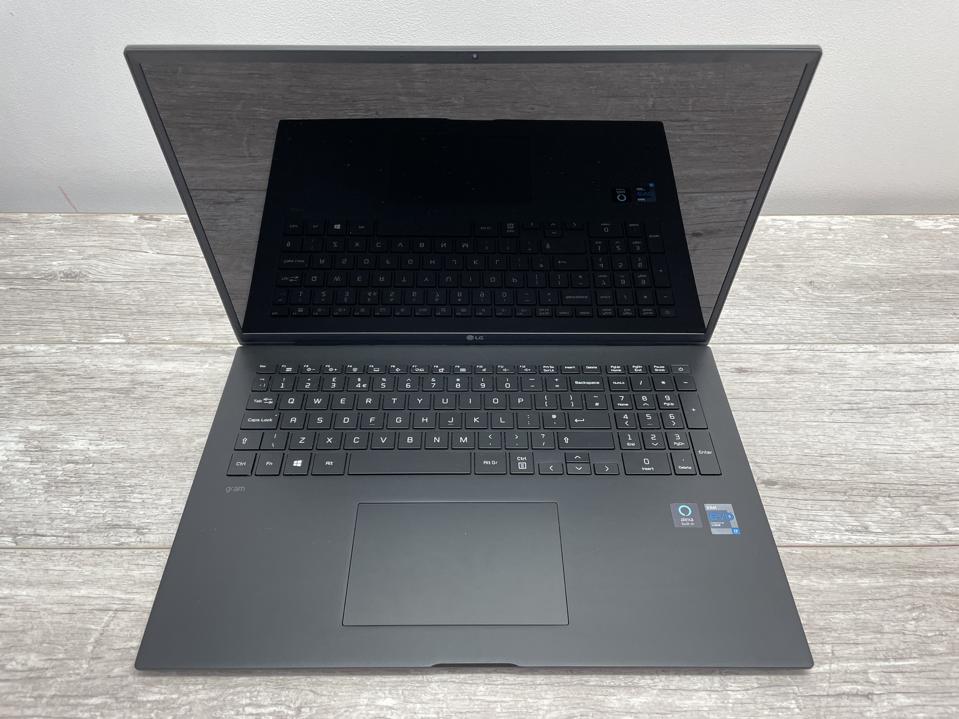 The biggest visible change is the color, with black being added to the mix this time and if 17 inches is a little too big, LG has introduced a 16 inch model with the same resolution and a weight of just 1.190g versus 1.350g for the 17 inch model here. 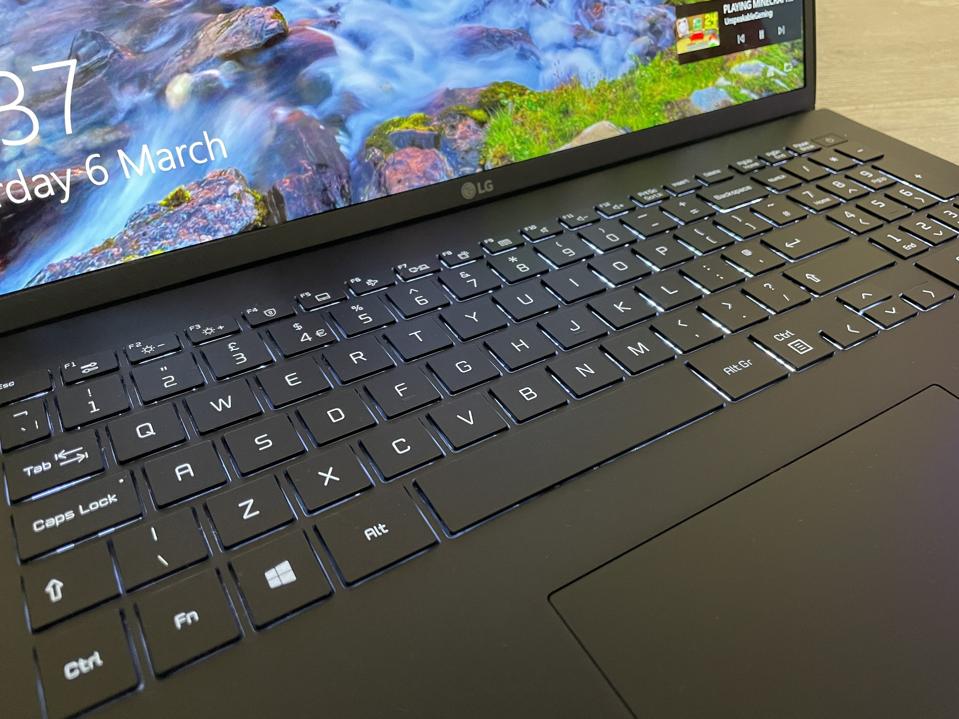 The backlit keyboard has received an upgrade and uses larger keys that have a slightly longer travel and a noticeably bouncier stroke that is actually very welcome as I’ve found previous models’ keyboard to feel a little flat. It feels a lot like a premium Lenovo Thinkpad or Dell Latitude and is very pleasant to type on for long periods, although you better make sure that coffee shop is lively as it is a little nosier too. The backlighting could certainly be a little stronger and even in dim light it’s barely visible, especially as the characters on the keys, while semi-transparent are very slim. However, it still makes a difference in very low light. If I could suggest one thing to LG it would be to make the characters a little thicker so more light can shine through. 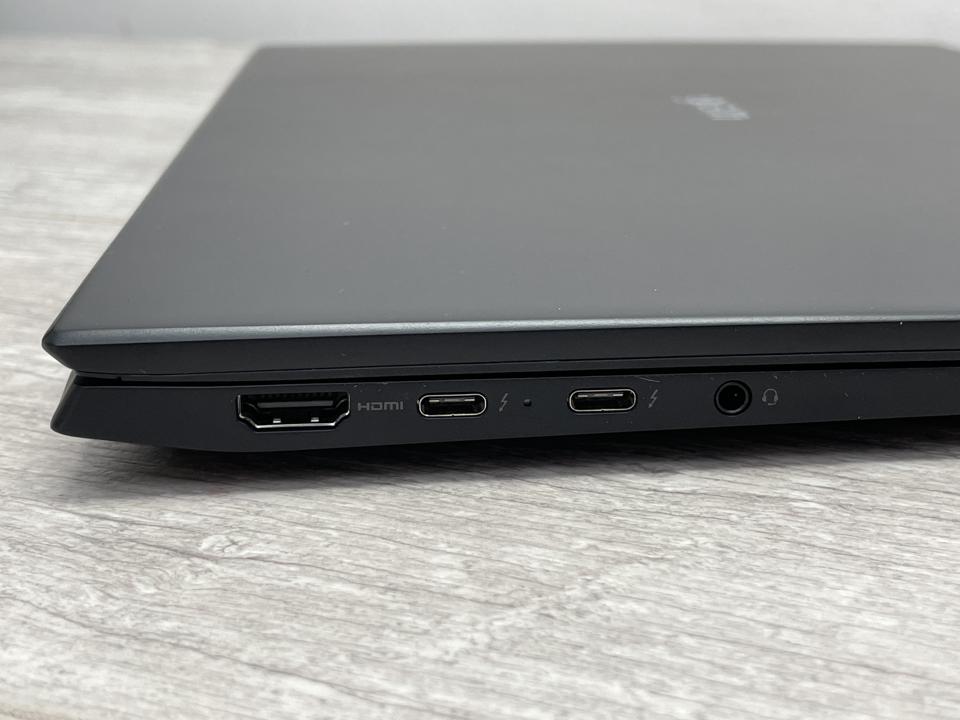 The power button should also be mentioned as it features a fingerprint reader. This worked well and was near instantaneous when used to log in to Windows. However, it was a bit too easy to press too hard and depress the power button, although this is likely something you’ll get used to. The touchpad is huge and has a smooth, low-friction surface that’s a pleasure to use, with the only downside being that it lacks separate buttons for mouse clicks if you prefer that.

Build quality is generally very good. There’s very little flex in the base, with just a slight spring in the keyboard. The lid does flex however and can be pushing in from the top quite easily so you’ll need to take care not to have anything hard pressing up against it in your rucksack.

The core hardware and performance

At the heart of LG’s new Gram line-up is Intel’s Evo platform, which has certain standards for battery life, connectivity and performance. With the Gram, you get Thunderbolt 4 and in my opinion this is finally becoming a big deal since you get the full power, bandwidth and connectivity available over modern Thunderbolt ports. That equates to 32Gbps (storage up to 3,000MB/sec), the ability to wake the laptop using a mouse or keyboard connected to a Thunderbolt 4 hub and support for two 4K or one 8K display. 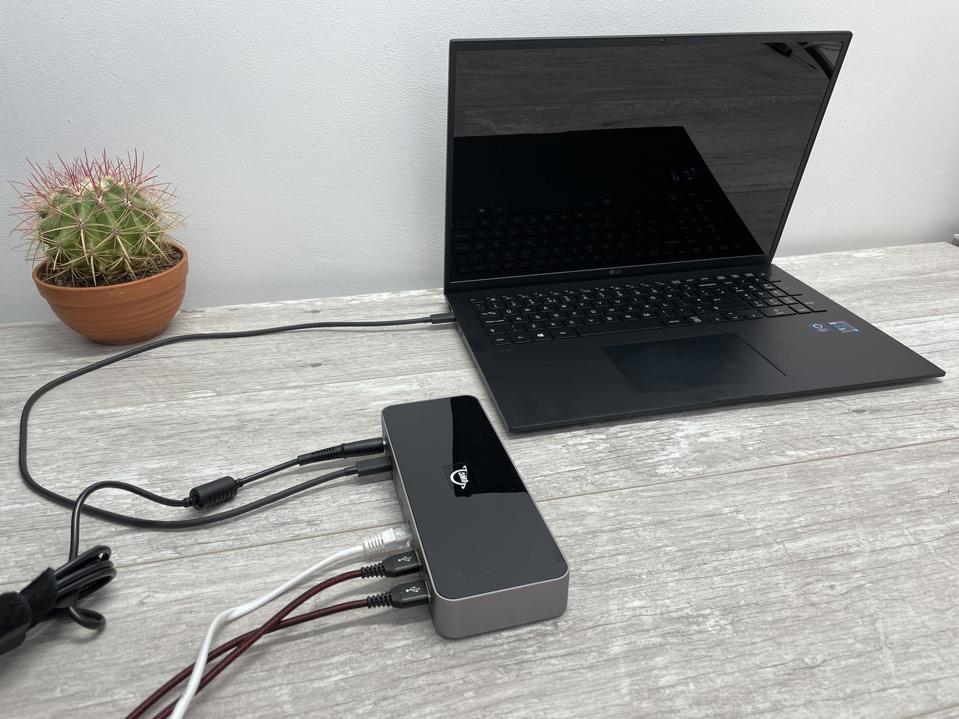 Thunderbolt 4 docks such as this one from OWC can provide power, networking and USB connectivity … [+] while connecting to your laptop using just a single Thunderbolt cable

You can charge the laptop using either Thunderbolt 4 port on the side, plus if you use a Thunderbolt 4 hub, you can use the hub’s own power to charge your laptop as well as act as an anchor for all your peripherals. In other words, you just need to hook up a single Thunderbolt cable to the LG Gram to connect your mouse, keyboard, external monitor, charger, network cable plus anything else you might have connected to a USB port. That’s a real boon if you need to pull your laptop away from your desk regularly. 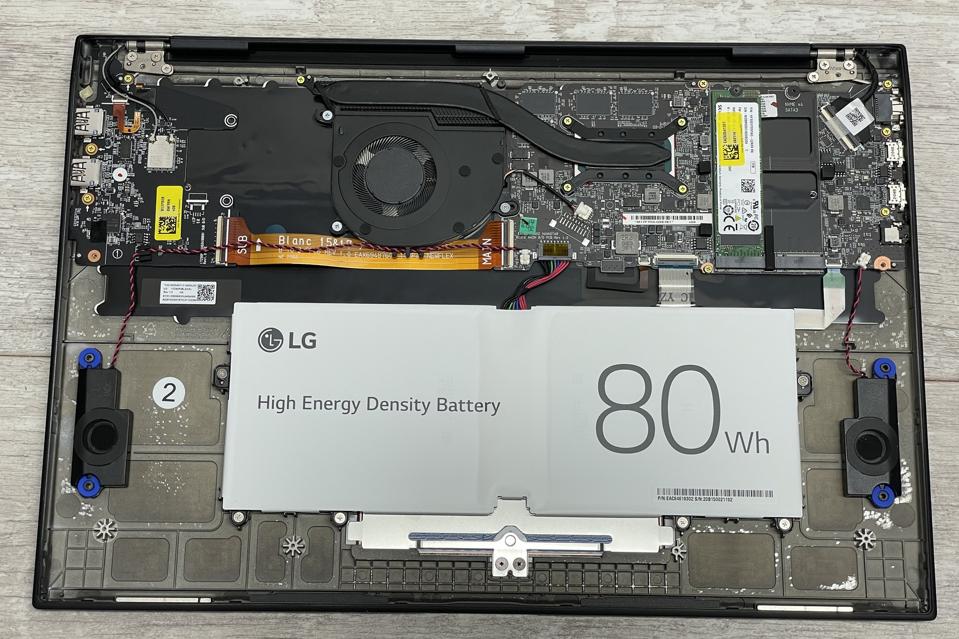 My sample included a Core i7-1165G7, which has four cores and eight threads and a peak boost frequency of 4.7GHz and powered its way to a multi-threaded Cinebench R20 score of 1,660 compared to 1,204 for the Core i7-1065G7  included in the 2020 model. The single-thread score was faster too at 473 versus 407. You also get 16GB of memory, but as you can see above, the user-upgradable SODIMM slot is gone, so you’ll need to specify your memory amount and stick to it (and 16GB is highly recommended, 8GB models are cheaper and available).

Also included is Intel’s new Xe graphics – a huge upgrade from the traditional integrated graphics, although you’ll still need to lower the graphics settings in games as I only saw an average frame rate of 24fps in Wolfenstein Youngblood at 1,920 x 1080 and low settings. Less graphically demanding games should be smoother, but afterall, this isn’t a gaming laptop so the fact we’re considering gaming at all is impressive. 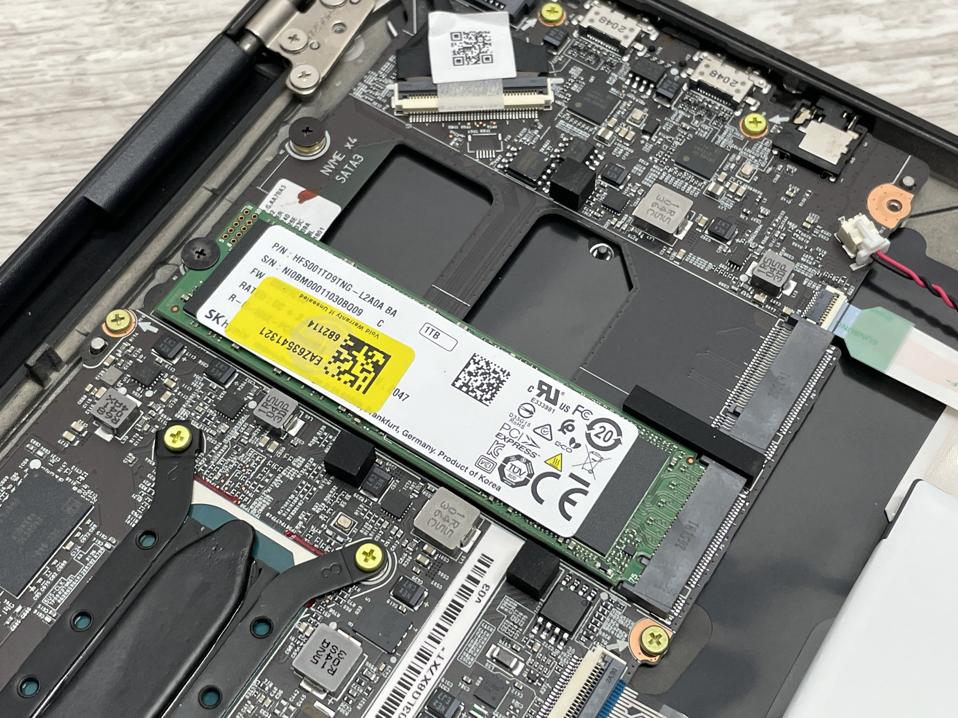 A 1TB NVMe M.2 SSD is included which returned speeds of 3,440MB/sec read and 2,549MB/sec write and there’s a spare M.2 slot under the cover too. Given the extra slim chassis that’s just 18mm thick, you can maybe forgive some omissions, especially as many of its rivals also lack them. There’s no Ethernet port for starters and no SD card reader – only micro SD and only two USB ports. However, you get two Thunderbolt 4 ports so the idea clearly, as with Apple products, is that you use a dock. 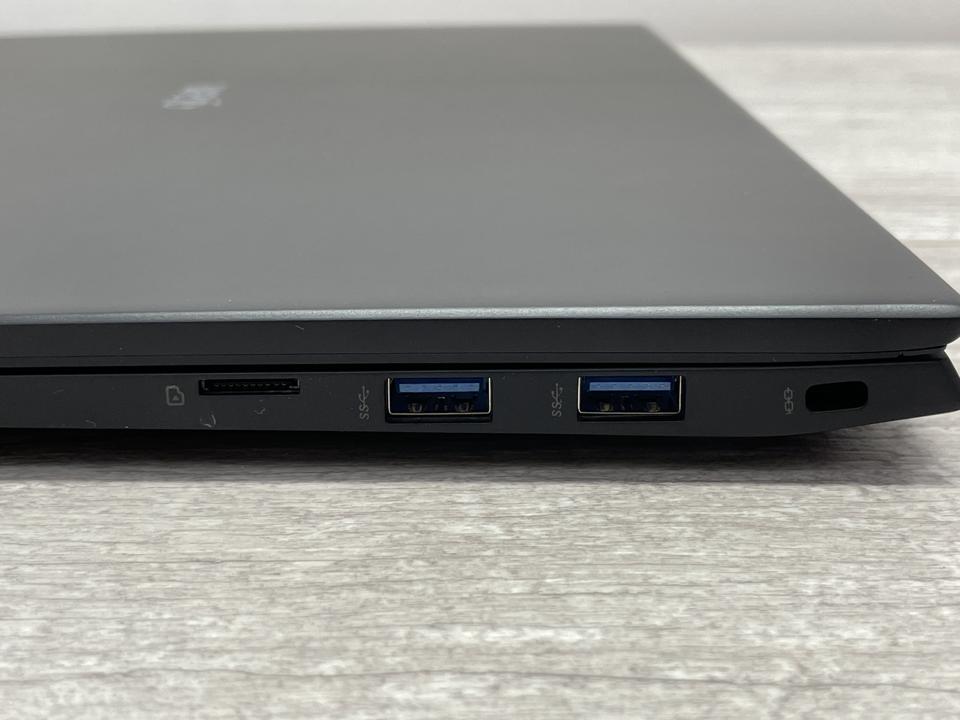 The Gram 17 includes two USB ports, a micro SD card slot and two Thunderbolt 4 portsd only extensive video editing tests saw the fan spin up. Even here it was still very quiet, although temperatures did peak at 91°C with all cores loaded and the all-core frequency would fall to 2.4GHz regularly – far short of the 4.1GHz Intel claims for the CPU’s all-core frequency. Switching to the Gram’s performance cooling mode saw a couple of hundred megahertz added to that, but it would still sit below 3GHz if all cores were loaded for extended periods. As I haven’t tested any other 11th Gen-based laptops yet I can’t say if this is an issue specific to the Gram 17 or not.

The screen uses IPS technology and a glossy screen and was bright and vibrant with a measured peak brightness of 324 cd/m2, which was enough to use it outside or in bright rooms with no trouble except the odd reflection from the glossy screen. However, using the exact same calibrator I measured 405cd/m2 with its predecessor so as far as I can tell, it’s a dimmer panel. It offered 100% coverage of the sRGB spectrum and 90% Adobe RGB.

LG made the move to an 80Wh battery last year offering 11 hours in my usual battery life test on a WiFi video streaming loop. However, the 11th Gen Intel CPU and Evo specification clearly offer some benefits here as I saw a little over 14 hours in the same test. This is deeply impressive as it means that carrying out more mundane tasks will likely see you stretch well beyond 15 hours. 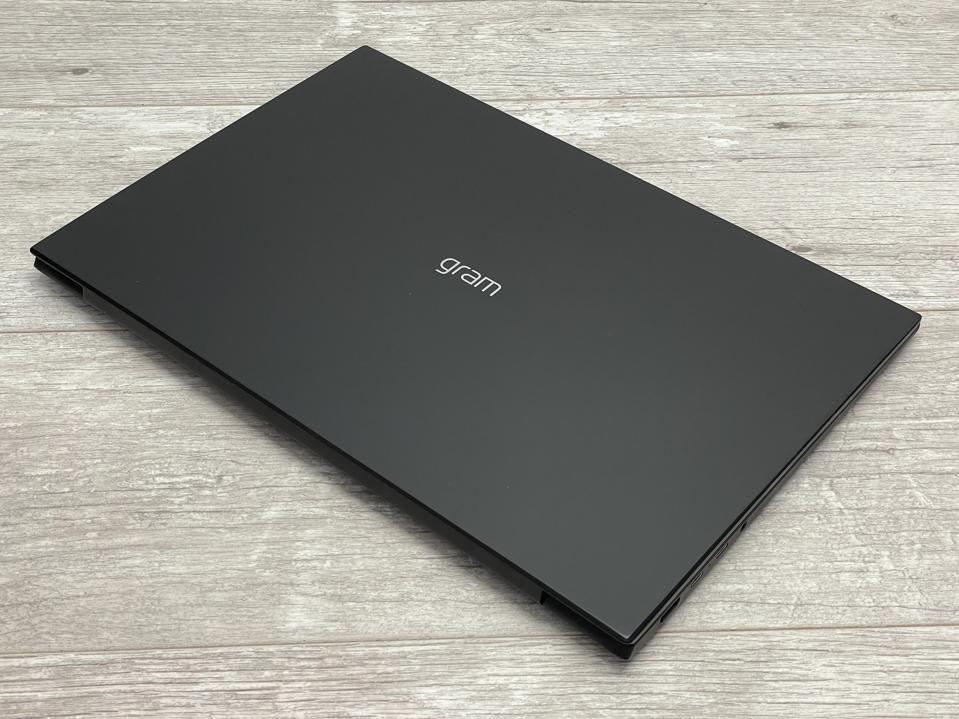 If you were to ask me if the latest Gram 17 is worth upgrading from either previous version, it’s an interesting question because there are several reasons I’d feel compelled to say yes. The battery life gives you an extra couple of hours for starters, you also get Thunderbolt 4 support, a more powerful CPU as well as graphics performance courtesy of Intel’s Xe integrated graphics. As a modern laptop in its own right, the Gram 17 is still almost peerless with its large 16:10 screen and sub 1.4kg weight that continue to make it a highly compelling option for content creators and business users that need to maximise productivity.

There are a few niggles, though, such as toasty CPU temperatures in multi-threaded loads that see the all-core boost frequency fall away, the fingerprint reader being located on the power button and a somewhat flimsy lid and keyboard – neither of the latter presented much of an issue though . If the size and low weight are of key importance then this is still the 17 inch laptop to beat and this is easily the best model yet.