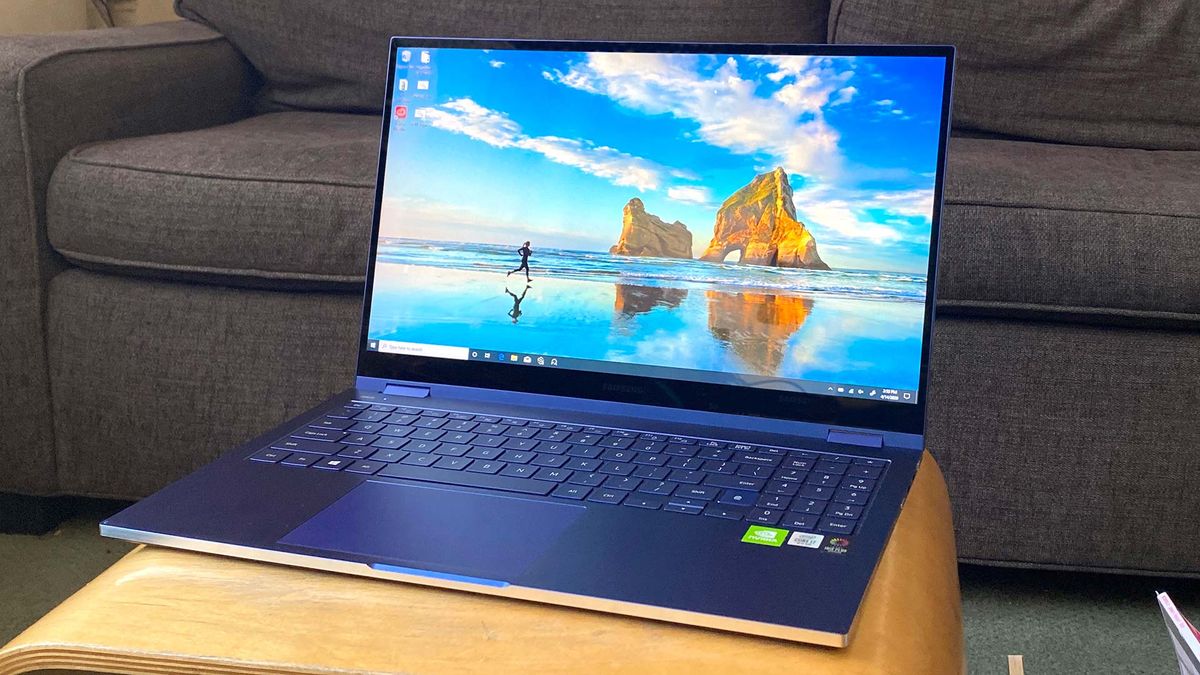 The Samsung Galaxy Book Flex is the company’s latest attempt to stand out in a field it’s had less-than-stellar success with: Windows PCs. But this 2-in-1 laptop offers a mix of strong performance with some unique features, to mostly successful results.

From its bright 15-inch screen to its strong performance and even more-striking color, the Galaxy Book Flex could be a laptop that brings Samsung back into the PC conversation. Even further, its nifty Qi-charging touchpad offers the kind of unique functionality we’d like to see other laptop makers toy with.

We also love the Galaxy Book Flex’s fantastic endurance and solid performance, but there are some asterisks getting in the way. Specifically, its keyboard takes some getting used to, thanks to a questionably-placed fingerprint reader and shallow keys.

Still, this Samsung Galaxy Book Flex review will show why Samsung’s made one of the best laptops around.

The latest Samsung laptop is the Galaxy Chromebook 2, which looks to solve the battery life issues of its predecessor. It was one of the best laptops of CES 2021.

Samsung sells the Galaxy Book Flex in two sizes, each available in a singular configuration. We tested the Galaxy Book Flex 15-inch, which Samsung now marks down to $1,114 — down from $1,399. This laptop comes with a 10th Gen Intel Core i7 (Ice Lake) processor, 12GB of RAM and a 15.6-inch QLED 1080p display.

The Galaxy Book Flex arrived in May 2020.

Samsung is doing wonders with colors (the Fiesta Red Galaxy Chromebook is a highlight) and the Royal Blue Galaxy Book Flex is no exception. Just like that Chromebook, the aluminum Galaxy Book Flex chassis catches the light bouncing off of it, so you get a gradient of hues.

Because it’s a convertible 2-in-1, you can rotate the Samsung Galaxy Book Flex’s display up to 360 degrees to use it as a tablet or prop it up in display or tent mode. Since Samsung throws in its S-Pen stylus, I would have hoped the Galaxy Book Flex’s hinge were a bit stronger. Alas, when I tried to gently write against the 15.6-inch screen, I noticed a little wobble. Thankfully, the screen’s heavy enough for this not to be a problem when you use the Galaxy Book Flex in tablet mode.

You find the Galaxy Book Flex’s faster Thunderbolt 3 USB-C ports on its right side, next to its power button and S-Pen dock. The regular USB-C port, headphone jack and microSD reader are on the left side.

Samsung also throws in a USB-C to HDMI adapter and a USB-C to USB-A adapter. And while I assume I’d lose both of these relatively small parts, they’re better than nothing. The Dell XPS 15 and HP Spectre x360 15 both pack USB-A and Thunderbolt 3, plus HDMI.

The S-Pen, which protrudes ever so slightly, feels kind of unnecessary for this machine. When I popped it out of the PC, it showed a list of potential commands on screen. These included taking and viewing notes, using the S-Pen to draw a region for a screenshot and even annotating the screen. The creative class, looking to doodle or draw or taking notes with handwriting rather than with their keys, will love the option.

The best thing I can say about the S-Pen is that I prefer this method of taking a screenshot to how Windows 10’s screen capture tricks work.

Capable of producing High brightness and vivid colors, the Samsung Galaxy Book Flex’s 15.4-inch QLED panel is impressive. Watching the F9 trailer, I saw the glimmering gold of a public statue that the crew sped around, verdant greens in mountainside trees that other cars drove past and a vibrant red in the double-decker bus that Vin Diesel fought John Cena on top of.

Taking the Galaxy Book Flex outside for a brief moment in the park, I found itsOutdoors Mode to prove useful. Under the glare of real sunlight, the Galaxy Book Flex’s screen appeared a bit dim. But after hitting Fn + F10 to trigger this mode, the screen regained some of its pop with text becoming more legible and colors appearing more vibrant.

However, Outdoors Mode couldn’t fight the glare for entertainment. When I tried to watch the F9 trailer outside on a stoop, the added brightness didn’t make Michelle Rodriguez any clearer, as she was caught in the reflections.

Listening to The Arcade Fire’s “Rebellion (Lies)” on the Samsung Galaxy Book Flex, I noted how it filled my medium-sized living room with clear and accurate vocals and crisp violin strings. That same quality came through in Ghostface Killah’s “Cherchez La Ghost.”

The 0.9-megapixel webcam inside the Galaxy Book Flex is serviceable for Zooms, but it’s too grainy for taking any serious video. It’s sadly the norm for laptops, and shouldn’t be a surprise or disappointment. I can’t wait for some company to buck the trend and put a serious webcam in a laptop, but for now, we recommend checking out one of the best webcams for your setup.

The keys in the Samsung Galaxy Book Flex aren’t the real problem: the layout is. Using the Galaxy Book Flex’s shallow keys (similar to the MacBook Pro’s troubled and mostly-retired Butterfly keyboard), I hit a rate of 65 words per minute on the 10fastfingers typing test, with an 80% accuracy rate.

That’s a ways away from my 80 wpm and 93% accuracy averages, but I don’t blame the keys. The Galaxy Book Flex’s fingerprint reader, which sits right under the return key and takes up half of the space the right Shift key should, is the culprit. Because of that half of a Shift key, which I frequently found myself trying to click before realizing the mistake I made, I made a lot more typos than I normally did.

Just like Apple didn’t have to try and reinvent keyboards with the Butterfly switch, Samsung didn’t need to break up the Shift key to give the fingerprint reader a new home. Admittedly, this new location makes it really easy to find the fingerprint reader. But it would have been just as easy to use in the top right corner where the Asterisk button is, much like it is on the Samsung Galaxy Chromebook Flex.

The Galaxy Book Flex has a pretty big touchpad at 4.7 x 3.1 inches, and it offers smooth and responsive navigations. The frosted-red rectangle (which offsets the cherry red keyboard deck) speedily registered my two-finger scrolling and three-finger gestures in Chrome. I wish this touchpad weren’t so wide, as I kept accidentally right-clicking it. But it seems easy enough to get used to with time.

The 10th Gen Intel Core i7-1065G7 CPU and 12GB of RAM the Galaxy Book Flex allow for speedy multitasking. I saw no stutter when I split my screen between 12 Chrome tabs, including Google Docs and Giphy alongside a 1080p YouTube video (with Slack open in the background as well).

On the Geekbench 4.3 general performance benchmark, the Galaxy Book Flex netted a 19,137 on the multi-core test. And while it falls under the 28,882 from the XPS 15 (Intel Core i9-9980HK processor and 32GB of RAM), that doesn’t reflect poorly on the Galaxy Book Flex, as the XPS 15 model we tested packs a beefier CPU and more memory.

The Galaxy Book Flex stays cool under pressure. After streaming 15 minutes of HD video on Samsung’s notebook, our heat gun picked up temperatures that fell under our 95 degree comfort threshold. Its underside (the laptop’s hottest spot) ranged from 84 degrees Fahrenheit to 92 degrees by the exhaust vent, and its touchpad (74 degrees) and keyboard (82 degrees) were less warm.

Throughout this Samsung Galaxy Book Flex review, I’ve been impressed more often than not. Amazing battery life and decent 10th Gen Core i7 performance combine for a 15-inch laptop that is made for work, while its built-in S-Pen is a boon for the creative class.

That being said, while Outdoors mode helps the Galaxy Book Flex get brighter, you’ll find an even brighter and more colorful screen on the e OLED XPS 15. However, you’ll be paying at least $345 more for Dell’s laptop , and you also lose battery life. And compared to the $2,547 super-fast XPS 15 mentioned above, the $1,399 Samsung Galaxy Book Flex looks like a bargain.

Overall, the Galaxy Book Flex is one of the best laptops for creatives who want a big canvas for their next project.